Ingescape is used in many different contexts extending from R&D activities to fully operational solutions. Various ingeScape environments can be found in aeronautics, rails, energy, defense & many more… 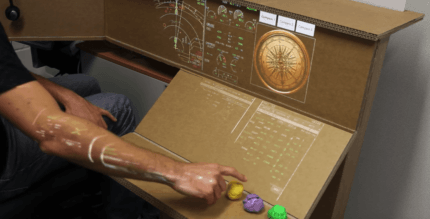 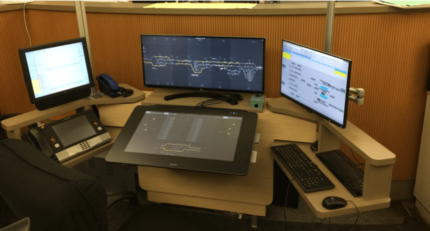 Operational supervision environment for RER ligne A in Paris

This is a “real world” operational project involving active communication with critical rail systems. It introduces innovative paperless multitouch in… 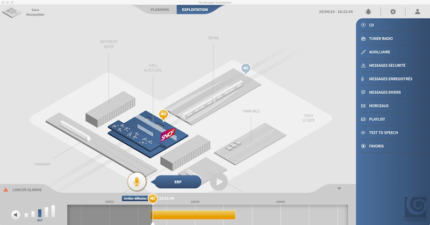 This operational project resulted in an ecosystem of applications dedicated to scheduling, monitoring and operating Public Announce systems in all kin… 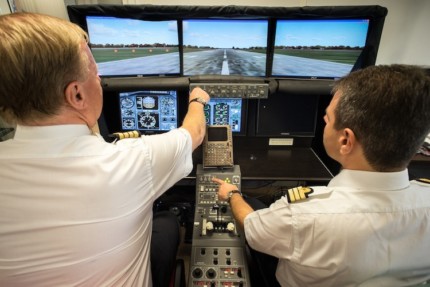 Register to receive a trial version

This project was developed as a prototype to demonstrate new methods and techniques for digital collaborative interactions in aircraft cockpits based on multimodality and a large set of i/o devices (leap motion, tobii eye tracker, speech recognition, etc.).

Started in 2014 and concluded in 2016, this project was at first developed with ad-hoc network solutions to insure the communication between the 7 different applications composing it. The applications are split between 5 distinct computers, respectively running Linux, macOS, Windows and iOS. Applications are developped in various technologies including Microsoft .Net (C#), Apple Cocoa (Objective-C), Qt (C++) and low-level C applications using various libraries. This is the perfect definition of a complex heterogeneous system.

The ingeScape platform enabled to port all the 7 applications into a unified ingeScape environment in three days only. The new version is completely supervised by the ingeScape editor and all communications are managed according to the ingeScape definition and mapping concepts.

The ingeScape library is embedded in all the applications. In order to switch to ingeScape, less than 1% of the total code had to be modified, thanks to the precise and simple use of the ingeScape library. Basically, previous network code has been completely disabled and replaced by ingeScape function calls, so that each agent can react to stimulated inputs to trigger its internal behaviors, and publish its outputs when relevant.

This project uses i/o devices with high output frequencies up to 120Hz, all using the same local network at the same time. The ingeScape platform introduces no noticeable latency in the system that previously relied on low level TCP and UDP data exchange.

Operational supervision environment for RER ligne A in Paris

This is a “real world” operational project involving active communication with critical rail systems. It introduces innovative paperless multitouch interactive workstations enabling to command and control operational equipments and to monitor all the human and train resources for the exploitation of the line. It can be seen as a combination of a large IoT network and a Big Data system with lots of data sources to be merged in order to insure proper situation awareness and control means for the operators.

Each workstation is composed of 5 applications running under Linux, 3 of them developed in C and the 2 others forming the graphical environment, in Qt/C++.

Massive communication flows are handled by the applications to:

This project has widely benefited from the iterative architecture and integration capabilities supported by ingeScape. Tests around connections and data exchange have started very early in the global process, enabling to quickly provide proof of concepts and to create a positive loop between engineering and UX design activites, one providing feedback to the other about opportunities and limits.

Logging and record capabilities as offered by ingeScape have been actively included in the project activities for archiving, training and technical validation.

This operational project resulted in an ecosystem of applications dedicated to scheduling, monitoring and operating Public Announce systems in all kinds of places (malls, train stations, schools, public places, etc.). Each site is equipped with various types of devices from speakers to command and monitoring boxes.

Ingescape was used to create two types of software agents :

The software proxies run on appliances based on Linux. The graphical applications run on Microsoft Windows (7, 8 and 10).

Redundancy between proxies is in place, based on ingeScape discovery mechanisms. ingeScape insures the synchronization between the proxies and the various graphical applications that are used simultaneously and sometimes concurrently between operators.

The multidisciplinary team from the PEPSS platform was interested in comparing 3 interaction modalities to achieve the task of controlling the engine power of an aircraft. We wanted to explore new digital interactions for this specific task. Three interactions were compared: the classical one using a physical throttle, an innovative one using a touch screen and a disruptive one using the grab specific gesture on a leap motion device. The flight simulation was provided by the open-source software Flight Gear.

The classic approach would have been to implement a hardcoded software prototype for our specific scenarios. But this kind of project needs to be carried out in an agile, iterative and multidisciplinary context and the system need to be flexible enough to easily integrate the new use cases, design modifications and experimentation protocols, including at runtime. And in addition, the experimenters were ergonomic students without technical knowledge and development abilities.

As our developer team already uses ingeScape to develop interaction agents, including an UDP bridge to interact with Flight Gear, it was really easy to set-up the experimentation by reusing these exiting ingeScape agents, literally with no cost-time development. The students were autonomous in the solution design and experimentation control at runtime, using the ingeScape editor. That is a great example of ingeScape enabling the reuse agents for a totally different usage than the initial one, thus saving development time. And also modifying and adjusting the behavior of a system in real time without any technical knowledge, thus giving the control to the experimenters.